It was in June 2010 that I fell in love with running. It was a few years post high school in 2008 that I decided it was the right time to start making some changes in my life, with exercise and diet. I played football my whole life and consistently weight lifted and literally had never ran a mile before. I started my running journey weighing 220lbs. I will always remember my very first “run” on the treadmill at the local YMCA. I lasted maybe 15 minutes, at a speed of 5mph. It was more of a run/walk with lots of huffing and puffing and instant anxiety of “I can’t do this”.  I was winded. I was tired. I wanted to give up. The sense of judgement and embarrassment filled my mind. But I stuck with it, and as days turned into weeks, and weeks into months, the weight slowly started to come off. I was soon able to run for 30 minutes non-stop and thought to myself, “I have come this far, I am not stopping now“. For the first time in my life, after losing some weight, I finally starting to feel good about myself. I starting to gain that confidence that I never had. I was determined to keep run training, and continually lost the weight. I set weekly goals to stay focused and on track, whether it was to hit a certain speed or time. I would celebrate each goal completed by setting another goal, and another goal, and another goal. I never hired a coach. I did not follow any type of run program or plan. I was running on pure determination. It was multiple months of tears, sweat, and eventually happiness.

Fast forward a few more months as the speed and time on the treadmill kept increasing and the weight decreasing, I knew of the home town event, the Manitoba Half Marathon held annually on father’s day. I thought to my self in March 2010 how cool and amazing would it be to participate in a half marathon? Could I do it? What would my family say? What would my friends say? Would I fail? I don’t know how to run that far? I am just a recreational runner? So with out knowing any different I registered for my first half marathon. I will never forget the emotions and happiness of crossing that finish line in a time of 1:39:11. I had done it. I finished the half marathon. I ran the entire race non-stop. It was that moment shortly after crossing the finish line in Winnipeg that I knew I was hooked. It was the instant sensation of “ANYTHING IS POSSIBLE”. I couldn’t help but to flash back in the moment on the months where I started from, to where I was currently. Wearing the finisher’s medal around my neck. It was reaffirmed a few months later as I was flipping through a running magazine at work and I saw an advertisement for the Toronto Waterfront event in October. I was gravitated to this flashy advertisement that said “ make something awesome out of nothing “ I hopped onto a computer that day, registered, booked my flight, and contacted family in Toronto that I was coming for this Half Marathon.

Fast forward to today. 10 years later. Now weighing 180lbs, I have now completed a Full Ironman, 2 X Half Ironman's, 12 X Marathons, 45 X Half Marathons, dozen’s of 10mile, 10km, 5km, and olympic/sprint triathlons. My current goal is to qualify for the Boston Marathon in a time of 3:05.

I have a special love and passion for running, and would love to share it with you! I know the grind, I know the struggles, and I know the feeling of “where and how do I start? “

Let me help you, help your self. You will not be disappointed!

Thank you for taking your time to read my story. 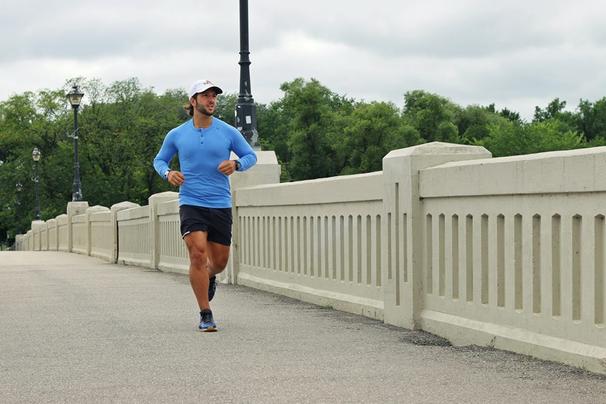